The lifeline of all musical performances can be found in percussion. Without the basics of a rhythm leading the melody of a song or performance, it would be ultimately dull. It will not express any form of emotion or shape any pleasing resonances or rhythm. Let’s check out some of the best cajon drums to choose from.

Comparison of the Best Cajon Drums

What is a Cajon?

In its most basic form, the cajon is nothing more than a box-shaped drum. It is played by slapping or striking the front or rear of the drum with either fingers, hands, a mallet, or a stick. The cajon is made with six panels to complete the box shape. 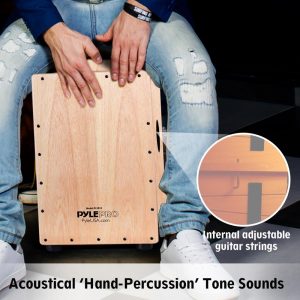 In general, ½-inch to ¾-inch plywood is used for the five main sides. The striking surface, or top, is usually made from a panel of thinner wood. The striking surface of a cajon is called a tapa. A soundhole is cut into the backside of the drum to improve its resonances. Modern cajons usually have rubber feet.

How Do I Choose a Cajon Drum?

Choosing the correct cajon depends greatly on the kind of sounds and resonances that you want to perform. The greatest influence on the needed sounds is the genre of music that you perform.

It is a versatile instrument and can be added to accompany any form of music. The most popular is the groovy Peruvian music and stylish flamenco guitar music. The sound of the cajon drum is greatly influenced by the design and materials used.

Some say that the best resonances are produced using maple wood. However, this is an expensive make that might not suit all players and styles. Doing the correct research and observing the product you want to buy is vital.

Here are the best cajons:

Review of the Best Cajons

Finding the right cajon for you could be tricky, as there are so many brands to pick and choose from. You will find, though, that some are just better than others. Finding the good, quality cajons out there is a daunting task for sure.

Luckily for you, we have searched and gathered all the best cabins on offer today. Take a closer look at some of the most popular and trusted cajons you’ll find out there. Picking any of these will leave you feeling happy with your purchase. 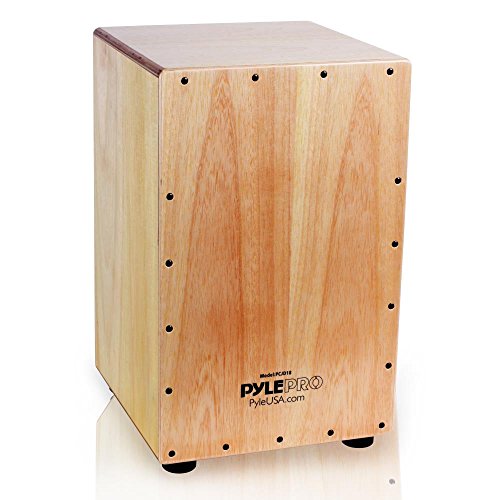 Everyone has fallen in love with the remarkable quality that this manufacturer invested. It is handcrafted to ensure that only the best products make it into the shops. The most adored feature of the Pyle String Cajon is the adjustable design of the strings.

Its top-end quality and attractive price are the key reasons why it is our top pick. The quality invested in the Pyle String Cajon is of the highest standards and is guaranteed to last in both sound and make.

Any professional cajon players or drummers looking to add a bit of Peruvian groove to their percussion should invest in the Pyle. The only artists not likely to appreciate this model are the ones that either prefer snares or basic cajons. The inclusion of strings makes it the ideal accompaniment for guitar music.

All the effort and quality that went into the design and make of the Pyle makes it the best choice on the market. For those that are not interested in flamenco, we advise moving on to another choice. If you are looking for a flamenco cajon, this is likely to be the finest instrument that you could ever encounter. 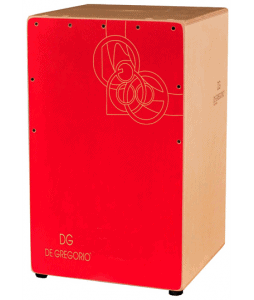 Recent supporters and lifetime patrons of this Spanish-made cajon have not been let down by the quality and design of this product. Among the most praised features that stood out was the high-quality sound produced by this instrument. There were hardly any complaints, and the quality and timbre have been described as powerful.

We chose the DG De Gregorio Chanela as our runner-up selection for those who would not prefer a flamenco-styled drum. If you are looking for the best quality cajon that can switch between the snare and basic styles, this is the most ideal option. Its quality is up to international standards, and the Spanish manufacturer goes all out to ensure their product is worth the investment.

Any professional percussion player would be wise to invest in this cajon. The DG De Gregorio is ideal for a variety of music. Thanks to the interchangeable snares, it is versatile enough to play classic and snare typical grooves. It is also considered the ideal cajon for worship music.

If you have the money to buy the most flexible and high-quality option available, we would suggest trying out the DG De Gregorio. Those looking for a beginner’s investment would be better off looking for something a bit more affordable. 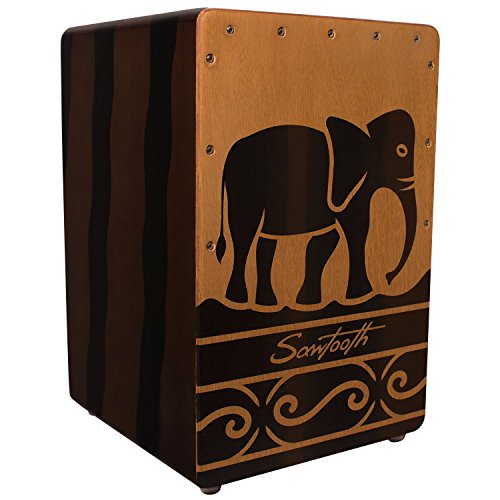 Not one person was entirely dissatisfied with this purchase. The quality of the Sawtooth Harmony Series is outstanding. It features plenty of innovation and offers astoundingly beautiful resonances to cycle between. It is an ideal snare-style cabin that is praised for its quality and attractive price.

As our choice for the budget-driven musician, we have chosen the Harmony Series. It meets the requirements and demands of drummers, and it comes with a very presentable price tag. As the best of the best for the least amount of money, you cannot go wrong with this choice.

Musicians driven by a need to save money would be best suited to this option. If you are in need of a high-quality, entry-level product that is affordable, then the Harmony Series is an ideal choice. It comes in two motive designs that are appealing and three sizes to choose from.

The Harmony Series from Sawtooth is an ideal beginner's option or budget choice. It is affordable and does not compromise quality to achieve this. If you want the best cajon drum for snare-styled playing, this is the best option available. 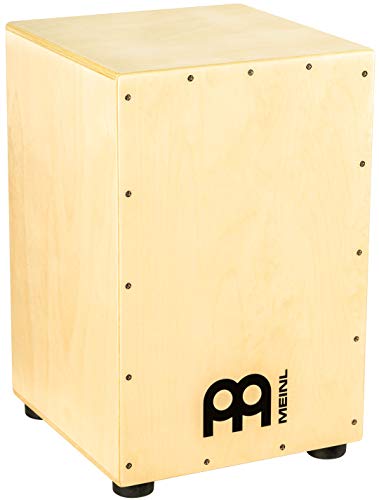 Recent supporters of the Meinl String Cajon Box Drum were mostly satisfied with their purchases. Only a few customers complained that the quality of the product compares poorly with close competitors. Although it may be suggested that they bought knock-offs of the same product, some do believe that it is not up to standard.

Meinl is one of the most celebrated percussion instrument manufacturers and is based in Germany. Their products offer great value and affordable standards, but they are a little under the competition. It stands out as an alternative if any of the other products mentioned are not suitable.

Beginners who are looking for an affordable entry-level product but are not willing to compromise sound would be best suited to this option. If any of the other cajons are, for some reason, ill-fitting to you and your needs, this would be an ideal choice to try. However, if you are in search of a plain, basic alternative, it would not be suitable.

If German quality is what you would prefer over national or Spanish manufacturers, then Meinl drums would be the best option available. The sound quality is up to standard, and the price is much friendlier. If in search of the perfect beginner's instrument, look no further. 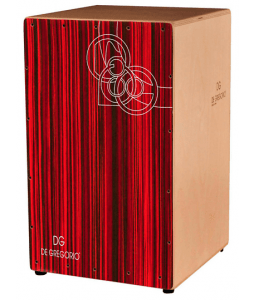 Recent buyers of the De Gregorio Bravo Snare were not at all disappointed. Among the most loved features is the impressive tone and sound delivered by this snare cajon from the Spanish manufacturer. The only thing not really appreciated in the DG Bravo is the simplified snare system.

As our final option and suggestion to you, we chose the Spanish manufacturer’s more affordable option. This is simply because one cannot compromise the quality of sound for any reason whatsoever. If you can’t afford some of DG’s more opulent cajons, we would point you in the direction of the Bravo.

Any professional percussion player will tell you about the fine quality that DG De Gregorio produces. Therefore, any musician looking for the best selection of cajon drums would do themselves a favor by selecting from this manufacturer.

If the Spanish quality of DG De Gregorio is what you want, you cannot go wrong to invest in either the Bravo Snare or the Chanela. If you want the best of the best, regardless of the cost or import fees, then go for DG.

There are three main types of cajons available for purchase. These types all have unique sounds used in different genres of music.

The selection is as follows: Peruvian, flamenco, and snare.

Snare cajons average a total of twenty strings, with some having fewer and some having more.

How to Tune a Cajon

Tuning a cajon is only needed if the drum is either a flamenco or snare design. Tuning consists of perfecting the string tension to provide the correct resonances and tones needed. A cajon that is out of tune will sound awful.

Tuning is rather simple, as most include the use of keys that are adjusted with an Allen or hex wrench. For perfect detail and the right tone to tune your Snare cajon, watch the provided video we have linked here for you:

There you have it! This is our selection of the finest cajons available on the instrumental market. Due to the changes and additional variations added to the cajon, it would not be likely to find the old, traditional styles anymore. Only those that have the ability to remove the snares and strings can be used for Peruvian classic music.

If you have reached this point and still have a couple of questions on your mind, take a look at the commonly asked questions and their answers below.

Is the Cajon Easy to Learn?

Learning to play the cajon is an ancient tradition and has developed for many years. It is not the easiest instrument to learn, but with practice, you will be well on your way to mastering it.

What is Inside a Cajon?

The most basic cajon is nothing more than an empty box with a soundhole. Only cajons used in flamenco or snare music would include the addition of strings on the inside of the box. Flamenco-styled cajons have fewer strings and typically use metal guitar strings.

How Loud is a Cajon?

A cajon has a long-range of volume sets. In particular, the loudest types are suitable for orchestra music, and the smaller ones are very ideal for open-air performances. The quality of the sound is loud enough to support all kinds of instruments and can be heard well above accompanied resonances.

Who Invented the Cajon?