Not so long ago, if you were about to say “synth” (or “keyboard”) most people would imagine exactly the 61 keys model. So, no matter if you’re a beginner or you’re thinking about upgrading your equipment consider this size to be a standard keyboard format in the music industry.

At a Glance: Our Top Picks for 61 Key Midi Controller Keyboards

Is a 61 Key MIDI Controller Keyboard Hard to Learn?

Like every other instrument, it fits under the “easy to learn, hard to master” category. Basics can be learned within a couple of weeks, while some tricks and techniques are mastered in years to come.

The good thing is however that if you had any experience with smaller models, you can use everything you’ve learned so far. You may need time to adapt to a bigger key size or different feel and response, but the playing remains the same.

Also, based on your playing and genre preferences the truth is you don’t have to be a virtuoso to create beautiful songs.

Now we’re going to check some of the best 61-Key MIDI Controller Keyboards out there. 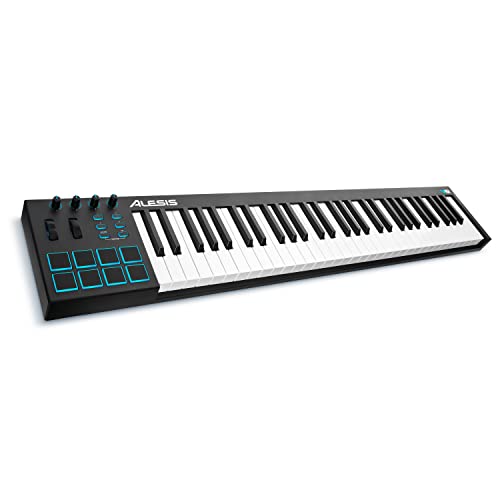 They say that the build quality of this unit is much better compared to what we expect from Alesis. According to reports, you might change the velocity response type to match your style of playing. However, users did expect more from playing pads and there are complaints on ghost notes triggered.

Keybed has one of the better playing feel we’ve encountered so far. We love how Alesis decided to put extra MIDI controls to the left side and how ergonomically well-placed it feels. There is also some very nice free software included so you can start your music production straight out of the box.

It was designed for less demanding users that are on a budget. Instead of removing some of the features, Alesis decided to go for a middle ground and offer a little bit of every controller type meaning that all keyboard players, beatmakers or studio users can use it properly.

This Alesis unit may not have all the specs required to be considered as a truly professional device. But, it may easily happen that its features fit your current needs perfectly while being friendly to your budget. 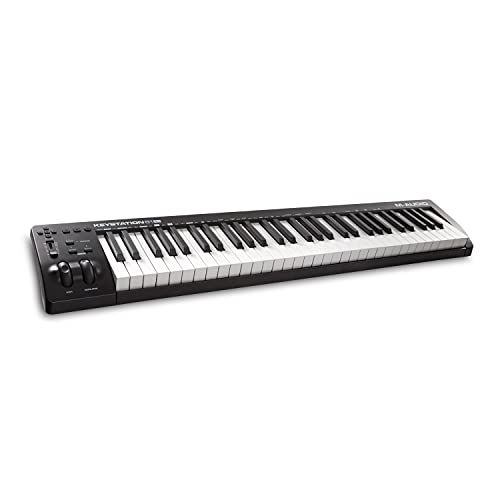 While being satisfied with its playability and slim format design, users complain that it’s not so plug-and-play made as being marketed. Windows 10 and macOS Mojave aren’t fully supported at the moment. We couldn’t confirm its iOS compatibility, as none of the users have reported such usage so far.

Its slim format makes it possible to fit on any studio desk. 5-pin MIDI OUT is always a plus and it is very nice to include lite versions of Ableton Live and Pro Tools among free software. The price of software it comes with beats the price of the unit, actually.

This unit aims towards older users, those who rely on playing only and aren’t that keen on using modern technology features. Live performers and musicians on tour can benefit from this unit as it doesn’t take too much space while it provides all the necessary connectivity options for playing sound modules.

If you don’t need a bunch of pads and knobs and just want to play, the ergonomic design of this product might be appealing for you. If your MIDI demands aren’t very advanced, rest assured that it will work properly in any situation. 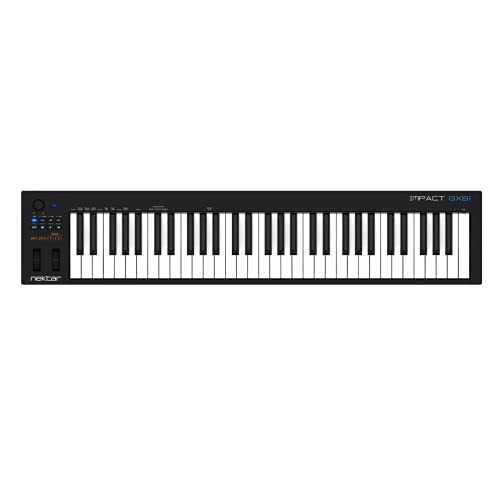 Overall impressions are beyond buyers’ expectations. They praise the keybed response and velocity curves especially and say it feels better than many other more expensive MIDI Keyboards on the market. The only concern could be that while being 38” long it may not fit in everyone’s studio setup.

It’s not usual to find a MIDI Keyboard with a slim and minimalistic design that doesn’t come short in build quality aspect, especially keybed related. Nektar also did a good job with iOS support that works stable making this model look even more appealing for those who prefer portable devices.

As it doesn’t have any physical controller it was meant for musicians who play on a daily basis only. Because of decent keybed quality, it can be an excellent tool for learning to play and read notes and beginners may appreciate its minimalistic and non-distracting design.

If a good key response is an important factor for expressing yourself, Nektar made this MIDI keyboard just for you. Especially if you want to keep your options simple and easy to carry around but as durable as possible. 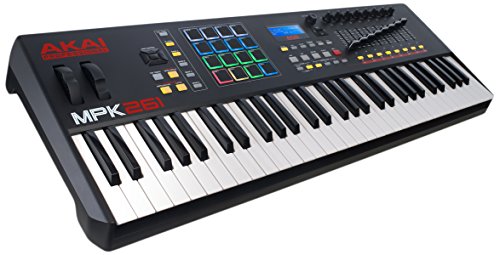 Experiences are positive in general. It works well on modern OS (both Mac and Win) and major DAW software support is just great. It’s also stated that it can be USB powered, too. Some users expected the keybed to be more responsive and to have more velocity curve options, yet.

Pads offer the best playing experience in the MIDI keyboard world and RGB backlit makes the whole unit modern and adorable. We salute the option to include regular 5-pin MIDI IN and OUT ports and are amazed that it comes with an option to have even inputs for even three-foot switch controls simultaneously.

Pad experience will make advanced beatmakers, hip-hop and electronic music people fall in love with this unit instantly. Regular MIDI ports will help those who would like to bring sound module devices to the show and a bunch of controllers will make it a nice pick for DAW software users.

No matter if you’re into modern or traditional music, playing or producing, you will find a proper way to use it. It wasn’t meant to be a cheap solution - it was made for professionals and built to last.

Buyers underline the slim design factor of this model as a big pro. Black keys are mentioned to be shorter than usual, so it may be worth to check this out before ordering. Also, build quality could be an issue as there are reports of models shipped with some faulty keys.

It’s incredibly rare to find a modern unit that has not just one but two MIDI OUT 5-pin ports, especially in this price range. This feature makes this unit excel in controlling external devices. Also, the weight is so low that we know some 49 keys model heavier than this unit.

Because there are no additional physical controllers onboard installed this unit is oriented more towards traditional keyboard players. And double MIDI ports make this unit very handy for live performances or expanding your current keyboard setup. Light-weight and slim design form makes it ideal gear for quick rehearsals or jamming sessions.

This device may not be your number one option. But due to its budget-friendly price you can put in your studio or practice room so you won’t need to carry your main more professional gear always with you.

Now that you decided that you want some of the reviewed models, let's go through some good and bad points that all 61 Key MIDI Keyboard models have in common.

Below are the main pros.

61-keys can provide you with enough keys to play and compose with almost no octave buttons pressed ever. This improves the creative process because your hands and mind are focused on the creative and not technically part of the performance.

61 keys are considered as a standard model in the keyboard world especially if we speak about regular keyboards. So in case something happens to your gear it can be easier to find an alternative to replace your MIDI keyboard.

Once you master 61 key layouts you will be able to switch between different sizes in a second. Based on an expert’s opinion, 61 keys are big enough so that you can play with both hands while getting all the advantages of faster response from synth-action keys.

Below are the main cons.

A 61 key controller is something you bring with you only if you think about it before. And we no matter how much it weighs being approx. 40 inches long definitely beats any idea of naming it “very portable”. Please bear in mind that you probably won’t be able to bring it with you on the plane as well without additional costs.

If you’re thinking about the next steps towards being a professional musician, you should know that 61 keys are the most used models worldwide. They might not be as portable as shorter models, but, in return, they will provide you with enough keys for your performance on stage or in the studio.

The next part of our blog is dedicated to the most usual concerns 61-keys MIDI Keyboard buyers had. As these models are not as cheap as smaller ones, you should think twice before deciding and these answers can only help you out, especially if you’re buying it for the first time.

Two of the most frequently used sizes for professional keyboards are 61 and 88 keys. 61 keys models have enough footprint to install additional controllers in regular size so that experience remains true to its original intent. And because it’s aimed at professionals, keybed quality is not compromised so often.

If you want to become a keyboard player that plays modern oriented music 61 keys would be just enough. But, if playing piano parts is something you prefer it may be better to pick 88 keys as those models try to replicate the piano-style feel and key response. Is 61 Keys Enough to Learn a Keyboard?

Definitely. There are professional keyboard players that played 61 keys model during their whole career. With 61 keys you will have enough key range to cover most of the songs you’re interested in. Bear in mind that for some piano pieces you may come short of keys, though.

Where is Middle C on a 61 Key Keyboard?

It’s located in the middle on your keyboard, third C note from the left. Some models have a C4 marker printed out to make it easier to locate. In case the C4 key sounds different from what you expect, check virtual software settings or an octave and transpose buttons on your MIDI keyboard. 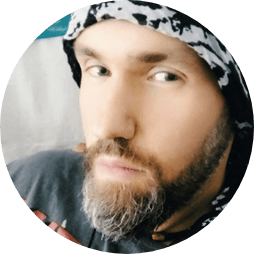