SO YOU WANT TO JOIN THE CLUB of reel to reel ownership. Perhaps you’re looking to do some analog recording, screw around with tape loops, or hell, just enjoy some albums in HiFi.

The good news is these babies turn up pretty frequently in thrift stores and garage sales AND despite their age, they’re built like tanks. The bad news is there’s a few common issues you may need to fix up before you’re ready to roll. 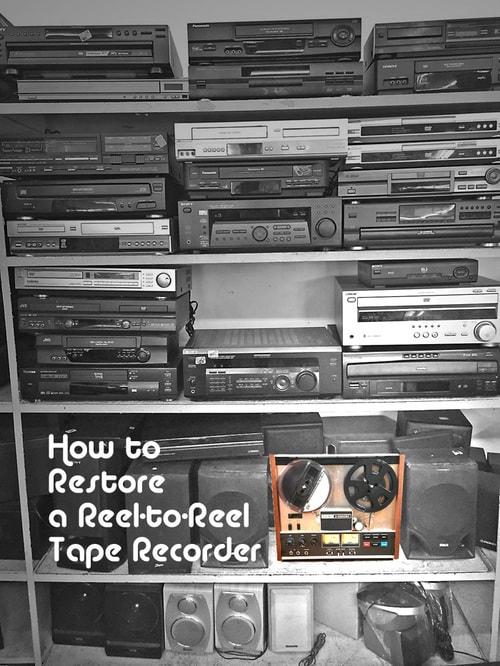 This guide will cover 6 common areas of trouble:

Throughout the guide, I’ll be demonstrating with my TEAC A-2300SX tape recorder (which I also picked up from a thrift store). The steps should be applicable, however, to just about any vintage reel to reel transport.

Wait, I Don't Even Have Tape

This guide won’t do you much good if you don’t have tape to test your tape recorder in the first place.

¼” tape and a 7” reel is the standard size for most thrift store tape decks. You can find used new tapes on Amazon between $10 and $30. Remember that while you only one need tape reel, you need 2 spools - you need an empty spool on the other side to “collect” the tape as it plays. If you’re deck didn’t come with one, you should be able to find one on eBay for just a few dollars.

KEEP IN MIND tapes disintegrate over the years. This not only affects their sound quality, but it can also damage the playheads on your tape deck. Alternatively, it is possible to restore tapes by “baking” them in a low heat oven (not joking). Tangible Technology has an excellent guide about that here.

YOU’RE STOKED. You bring home your tape deck. You set it up on the table, turn to plug it in, then discover this: You don’t have a single power cord that will fit this strange input: 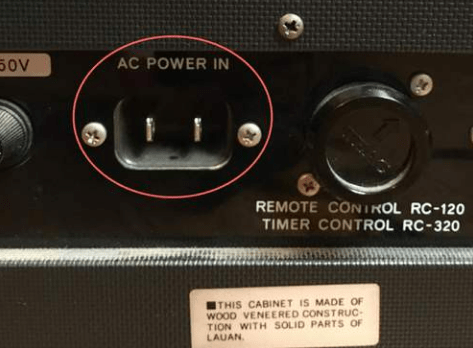 Many tape machines of the thrift store variety use this outdated NEMA input. It looks like a standard amplifier plug, but only with 2 prongs instead of 3.

FEAR NOT. If you have patience, you can order one on Amazon (with 2 day prime shipping). If you don’t want to wait, it’s also pretty easy to hack a solution. All you need is a ground wall adapter and a utility knife.

The plug you need is basically a standard wall adapter without the ground input. Find an adapter that’s ground on the female side but ungrounded on the male side. These are pretty common in old homes, as they enable you to plug in newer electronics that require a ground connection. If you don’t have one lying around, you should be able to pick one up from any hardware store for $1 or $2. Just make sure the adapter you pick doesn’t have any metal parts around the edges.

What you need to do is cut the 3rd prong (ground) using a utility knife. Press firmly and curve the knife until you make an incision. Once finished, check and confirm that it fits in your tape deck. If need be, make a few more cuts until it does. To plug it into the wall, just use an extension chord on the other side.

Use a utility knife to remove the top and bottom areas of the plug.

So you go through all the effort to plug it in, but then discover your tape recorder won’t power on. First thing’s first, look on the backside for a fuse container. Open it up and examine the fuse. If it’s burnt out in the center, then (hopefully) that’s your only problem. Bring the blown fuse to a hardware store and find a replacement, or enter the specs on Amazon and place an order. 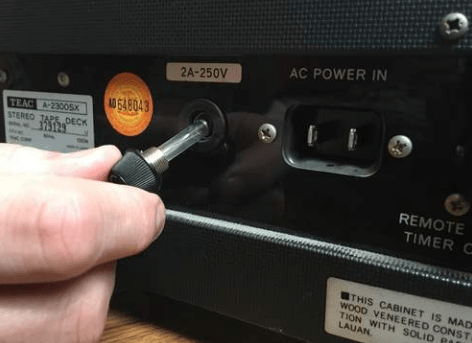 If the issue isn’t the fuse, it’s probably another component on the board. At this point I recommend seeking some experts on your particular model. Do a search on the Tape ​​Heads Forum for “your model + repair.” If there is a commonly-known issue with your model, you should find other users discussing it. If nothing comes up, however, it may be time to call an expert to get it fixed.

Problem #3:  It Powers On, But The Tape Won't Move

Let’s say the lights turn, but when you click “play” nothing happens. Alternatively, maybe it plays, but it can’t rewind or fastforward. DON’T FREAK OUT JUST YET. If luck is on your side, there may still be a quick fix.

A common issue with older reel to reel tape recorders is that the drive belt (the component that connects the motor to the tape spindle) either wears out or falls off it’s track. To fix this, you just need to replace it or pop it back into place.

To check your drive belt, you need to remove the face plate of your tape deck. This will vary depending on your model, but should just involve removing a few screws. Once it’s off, look at the area near the spindle (where the tape goes) and locate the drive belt.

If the drive belt is loose (like the one on the left), it may be failing to turn the spindle, despite the motor working just fine. Hopefully it's just a matter of popping the wheel back into place. Alternatively, the belt may be worn down and failing to "catch" the gears on the spindle. In this case you'll need to order a new belt from the manufacturer.

If you don’t see any issue with the drive belt, then the problem may be the motor itself. At this point, you’ll need help from experts on your particular model. I recommend doing a search over on Tape Heads Forum for “your particular model + motor repair.” 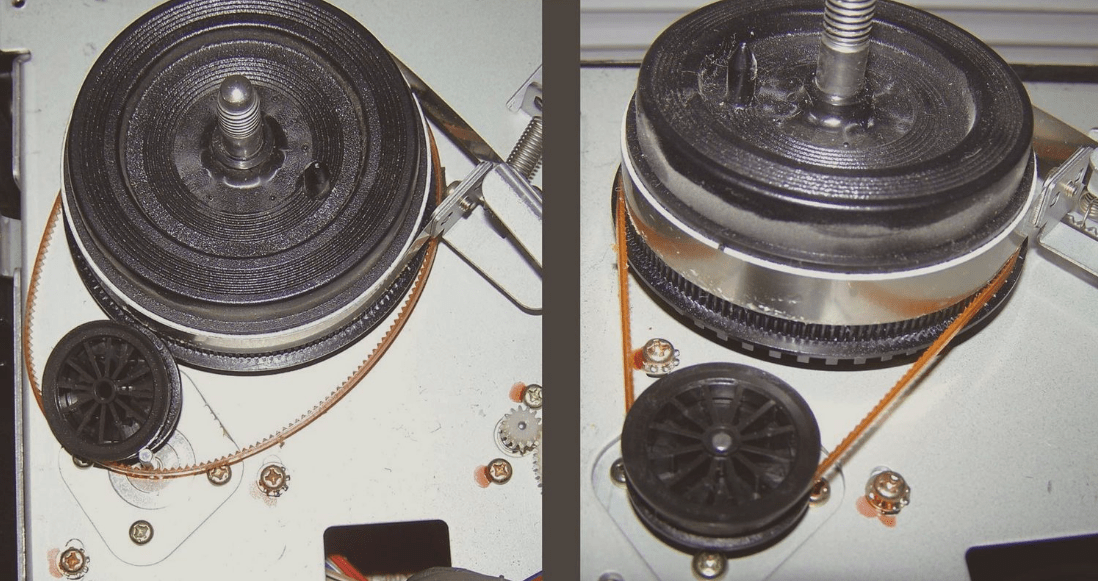 Problem #4: - It's Moving, But Won't Play/Record My Sounds

This is one of the most common issues with old reel to reel decks: The tape spins but it doesn’t play or record any music. Alternatively, it might work, but the sound goes in and out, only works in one channel or just lacks some high end or low end.

What’s the solution? You need to clean your tape heads.

Quick tape lesson 101: Reel to reel machines have 3 small magnetic tape heads that are essentially what makes them play and record sounds. The first one is the erase head. It removes previously recorded sounds from the tape. The 2nd is the record head, which imprints your new sounds onto the tape (when you’re in record mode) and the last one is the play head.

Over time, grime can build up on the tape heads. This causes them to lose contact with your tape, and thus fail to perform their job - be it erasing, writing or playing. 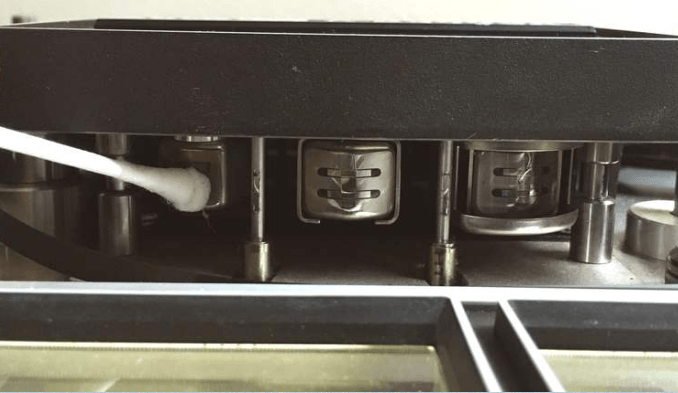 Give the tape another whirl and see if this solves the problem. It may take a few minutes of cleaning until you completely remove all the grit.

Problem #5: One Channel is Muffled or Not Working

If your heads are cleaned and shiny yet you’re still having this problem, it could be a number of things. The first thing you should do is try a different tape. Vintage tapes can “curl” on the edges, causing one side to lose contact with the playhead. Rigging up a newer tape is a quick way to detect if this is the issue.

Otherwise, click “play” and use your finger to apply some light pressure to the supply tape (left side). If you can now suddenly hear both channels in full detail, it means you have a fairly minor mechanical issue to solve. Your tape is not pressing fully up against the heads, causing you to get a weakened signal during playback or recording.

Again, make sure you’ve ruled out the tape as the culprit. If so, I would take another close look at the tapeheads, tension arm, guide and roller. Clear up any residue that could be preventing the tape from making full contact with the heads. Make sure the tension arm on the left side is able to move freely, and lubricate it otherwise. If none of this makes a difference, you may need a professional to realign your tape heads.

If applying pressure to the tape did not make a difference, it’s a sign that there could be a more serious electrical issue. I would bring the tape deck to a professional if none of the methods above work.

Problem #6: It's Playing at the Wrong Speed

If It's Playing Too Slow

1. Make sure all heads, guides, rollers, and tension arms are clean. Remove any residue that could cause friction, slowing down the tape.

2. Open it up and check that the drive belts secured tightly in place. Loose or worn-out drive belts can cause it to run slower than usual.

If It's Playing Too Fast

1. Take a look at the rubber pinch roller on the right side. If the rubber is too hard, or worn-out, it could be failing to “catch” the tape. You may need to replace the pinch roller, which you can usually find on eBay. Just make sure the part will work with your specific model.

2. Now power up your tape deck and press “play.” Check if the pinch roller is touching the capstan. If not, you may need to fix the pinch roller linkage by adding some lubricant. Vintage Electronics has a guide on how to complete this for TEAC models, which are especially prone to this issue. 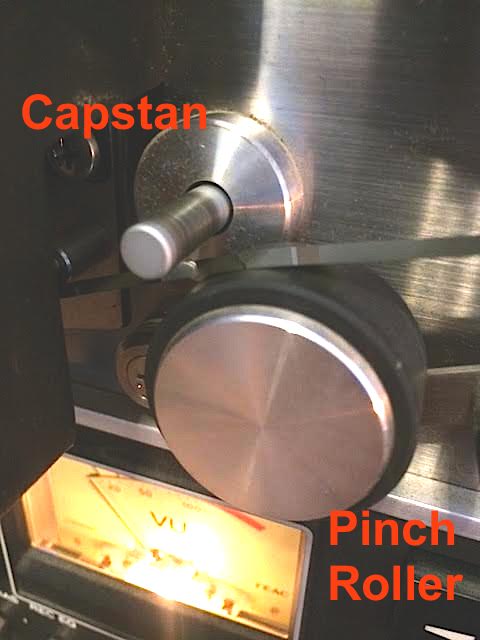 Hopefully these few quick fixes will get your reel to reel tape recorder running in tip-top shape. As you start recording, keep in mind that old, unbaked tapes can disintegrate on your machine. This not only kills your recordings, but it will add a layer of grime to your tape heads (requiring you to clean them, as we described above). Do yourself a favor and pick up a pack of new recording tape, or read more about restoring old tape here.